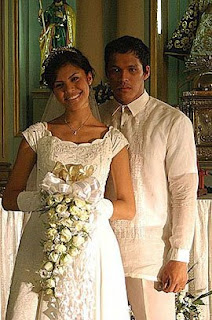 Where Pampanga in Brillante Mendoza's first full-length feature, Masahista, is parched and metallic in its visual aftertaste, here in Kaleldo, it is magic realistic, the landscape and the elements anchored to the passion and secrets of three women. Set ten years after the eruption of Mt. Pinatubo which buried the province of Pampanga under lahar, Kaleldo (Summer Heat) follows the lives of sisters Jesusa (Picache), Lourdes (Aquino) and Grace (Palermo) under the watchful eyes of patriarch Mang Rudy (Delgado) who is struggling to revive the family's woodcarving business. The names of the sisters establish the kind of religiosity that Mang Rudy observes, reflected in the way he demands obedience from his children who are ruled by emotional motivations which the movie reveals through snippets spanning three summers, pinned down by three elements as metaphors: Wind, Fire, Water.

Angin (wind) is Grace, the newly-wed and the youngest of the three who follows her whims to wherever it takes her as long as it takes her far from her mama's boy husband, Conrad. She detests having to leave her ancestral home for her in-laws' plastic-covered living room but tradition forces her to tame her rebellion as she slowly, against her will, settles down. Api (fire) is Lourdes, the middle child who appears to keep it all together. She is married to Andy (Paule) who on the surface is a meek, spineless man but is a sadist in bed and even more violently monstrous when angered. Lourdes sleeps with a bank manager to get her father's loan approved, to catastrophic repercussions. Andy beats her and Mang Rudy suffers a stroke. Danum (water) is Jess, quietly-serving, self-sacrificing, silently-drowning. As tradition dictates, being the eldest has appointed Jess as her father's caretaker but her taking on various jobs to help make ends meet for the family has prompted her to ask her lover Rowena (Volks) to watch over Mang Rudy. Jess and Lourdes argue over Rowena's contribution to the household; Mang Rudy puts his mighty foot down and declares that if Rowena is the reason for the tension between the sisters then she has to leave.

The parallelisms are sometimes too obvious: the wind as fickle temperament, fire as destructive rage and the sexuality of water when superimposed against lesbian lovemaking. Mendoza cuts his narratives with graceful shots of these elements---his arthouse leanings a little too contrived---but when it does work, the result is a brilliant cohesion of atmosphere and narrative.

The chapter on Fire is the richest of the three because it explores not just the element's destructive nature but also its cleansing and transforming attributes. Andy, to show his remorse with what he had done to Lourdes and as an act of repentance, takes part in the self-flagellation ritual held during maleldo (Mahal na Araw or Holy Week) while Lourdes who is secretly watching from a tricycle gets a spattering of (repentent) blood. Right from the start of the chapter, Mendoza has been showing us droplets of blood staining and blooming in water and he neatly ties this up with a scene of Lourdes washing the bloodied shirt of Andy, the final act of forgiving and forgiveness between the married couple.

Kaleldo continues Mendoza's ode to Pampanga and the families struggling within its dying soil. His love for the culture is palpable, the language and the food, the industries and the deeply-rooted cultural tics are framed against wildly vibrant skies, tangible worship at its most picturesque. On the surface, Kaleldo is a beautifully-shot family drama. Mendoza's storytelling can be confusing at first as he purposely veers away from conventional melodrama, and his visual metaphors have the tendency to distract. But once you get used to the movie's rhythm, then, just like the change of seasons, you'll welcome the varying textures and colors of the passing of time.
Posted by Thor Bee at 6:55 PM

Very well-written review; makes me want to watch the film again. I didn't like it the first time I saw it but I guess it's time to watch it again, especially knowing what Mendoza has done since. Great blog, you have here...

Hi, Oggs! Thanks for the compliment. I'm a fan of your School of Inattention.

I never did catch Kaleldo when it was shown in the cinemas. The writing could've been better but I did enjoy putting the pieces together, matching the visual undercurrent with the narrative. The strange weather we're having right now might have added to my appreciation of this film. :)

Haven't seen this one yet, but I just purchased Mendoza's Tirador VCD. God, I love this film.

I love Tirador, too! Wish it was out on DVD, not happy with the VCD resolution eh puro shaky cam pa man din.

Don't you wish that his films would come out in a compendium---from Manoro to Serbis. Wishful thinking ba?

Hehe, good luck with that. I don't mind his other films not coming out in DVD, but Kinatay and Serbis (even though I'm not a fan of the later) should.

I heard they canceled the screening of Kinatay in Shang. As always, the MTRCB got in the way. =P

ERAP for President then. :D We didn't have censorship problems back then.