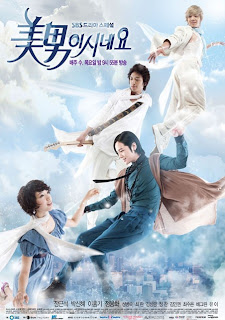 If I haven't been updating my twitter or if you've noticed that I've been letting some crops wither over at Farmville, it is because I've been busy with work---which is a great cover-up for late night catching-up with the TV drama You're Beautiful, a surreal brew of Shakespearean set-ups, Korean idol culture, and catchy K-pop.
A boy band boy-bonding with a Twelfth Night twist, and if that wasn't enough, how about we throw in a bit of Sound of Music as well. You're Beautiful makes suspension of disbelief unbelievably difficult: pixie-ish Park Shin Hye is Go Mi Nyu, a novice (soon-to-be nun) who has to stand in for her twin brother Mi Nam for a slot in a popular boyband A.N.JELL. Mi Nam causes quite a stir at the boys' dormitory, which results in strange attractions, a bleeding forehead and some spitting action, all for laughs of course, and that's just two episodes in. But its the strangeness of overlapping styles that reel you in. Like I've mentioned again and again, the appetite to please is palpable. The hunger to do more than what is expected more so, that the final product becomes impossible to define. 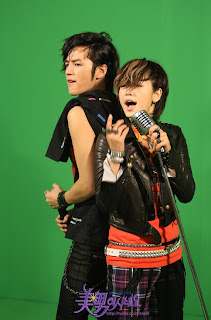 You're Beautiful is also pays homage to South Korea's idol culture while lovingly poking fun at the rabid fan base (which I'm a part of) and controlling recording labels. Casting FT Island's Lee Hongki and C.N.Blue's Jung Yonghwa as members of the fictional idol group gives the performances the authenticity it needs. Hongki and Yonghwa, though physically fitting the idol mold, also debunk the myth that manufactured groups are without talent---musicality as instinct rather than adornment on full display in their respective groups' albums. After School's UEE is also game, hamming up the bitchy with flair.
But the best thing about this drama is the music. K-Pop has been a little boring since the vocoder trend started; turned out I was looking at the wrong place. A.N.JELL churns out good power pop, catchy and undeniably soaring. Jang Geunsuk's vocals are strong and tender at the edges, Hongki's contribution to the OST shows off quite powerful pipes, and the band version with boy-girl harmonies is just, uhm, angelic.
Someone make them a real band, please. ****
Posted by Thor Bee at 2:35 PM 2 comments: