Be still my heart

Pitter-pat. Rilo Kiley and my belated enthusiasm. I can't stop listening. They're a little bit like the New Pornographers if only NP weren't so damn weird. Sex and drinking and monkeys (but never in one song, thank goodness) and infectious jangly guitars. Pitter-pat. Postal Service's "Be Still My Heart," B-side to "We Will Become Silhouettes," will rule the world by Christmas. A flurry of hopeful heartbeats. Like a mile-wide stethoscope was pointed to a city on Valentine's day and amplified the walks down the street, the first of a million kisses. Pitter-pat. Hailing a cab in Sampaloc, killer elbows ready to strike any approaching shadow. I was carefully eyeing the nursing student on my right, most probably in her early twenties, a formidable opponent. True enough, the cab I was waving at drove pass me and the driver rolled down his window for her. After conversing with the driver, she turned to me, smiled (I was glaring at her) and said: Manong, kayo na lang mauna. Naknangpucha. Manong na ako. Pitter-fucking-pat.
Posted by Thor Bee at 10:31 AM No comments: 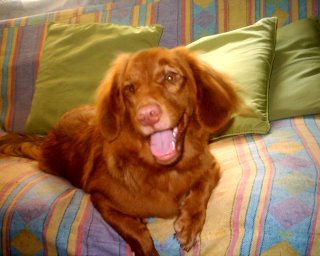 And that's his real name. But we usually call him Pot-Pot. It has been a little over a year since my sister's friend, Allan, gave him to us. He's so cute that I almost want to eat him. Especially when he's stealing food from the table.

Friday night and, after a couple of pages edited, I just want to play with Potter.

But no. He just wants to sleep.

He's actually a lot like me.
Posted by Thor Bee at 9:19 PM No comments:

I think I love you. Constantine. The puppet master. Knees buckle with just one pout. Greenbelt 3 --- park, balcony, practically the entire mall --- was packed. Air-tight. Constantine swaggers to the stage, in dark denims and a suit, pouts, flips hair, sings, sweats. He crowd-fucks with his smoldering eyes. And we buy it. Most of the time I was leaning on W's shoulder. Stunned at the cheesiness of his theatrics, but mostly weakened by his curvy mouth. He has a great voice, sure. But it's the low registers, the soft growls, that deliver.

Disco inferno. Wednesday was a great day to be gay. Rocker sex machina? Check. Madonna's Confessions on a dance floor? Oh, honey. More than Kylie Minogue with Danii Minogue in tow. I might be at my office desk right now but my heart's a spinning mirrorball, a sparkly, sequined star.
Posted by Thor Bee at 1:49 PM No comments:

After the After Party

Turning 30 felt major. Turning 31, not so. I think that 31-39 is like the growth-gap years, the gray area, the space-time continuum fold. A limbo. The long lunch hour before we go back to work in our forties. It's getting settled. It's the three turns before the long comfortable sprawl on the grass. It's the denial years. It's the fun years. Plus the constant sideways glances at blinking ATMs.

I turned 31 in bed, watching the first episode of Love Story in Harvard. One of W's surprises. But the Infernal Affairs boxed set shut me up. This guy really knows how to.

The post-birthday birthday party, in front of Sam's eviction, and later the mood-swinging Full House marathon, and much much later, cognac and photo albums and chocolates, on the floor just like the good old days in the university. Like we were waiting for class to begin. Waiting for morning when it's safer to catch a ride home.
Posted by Thor Bee at 11:42 AM No comments: