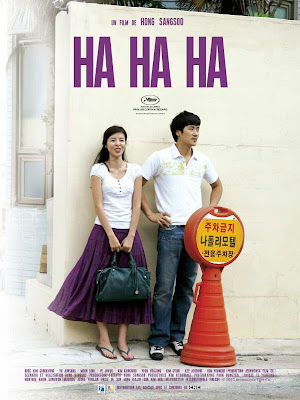 Because last Saturday's drink up was strange. "Drinking down memory lane," a drunken text message, slurred across time (the flooding of memory) and space (physical, in a dingy, hole-in-a-wall home for soju drunks; the empty chair reserved for someone)---a text message which I had insisted was brilliant, and not much later, the succumbing of a dear (old) friend to my insisting and to lovelorn plot twists that is, was, or will be our lives.

And so, Hong Sang-soo's Ha Ha Ha as refrain, a breathing, stuttering drunk of a film that vibrates with wit, middle-aged bravery (that surfaces at the brink of toppling over), and endearing strangeness, like drunken kisses and pulling grass from the ground in a fit of anger.

What a relief for a film to just ramble on about connections, great legs, and poetry. (A character in Oki's Movie, the film that followed Ha Ha Ha, said that he would like his film to be viewed as an experience similar to getting to know a person. That meaning may not be important. Ask aloud, What is the meaning of Ha Ha Ha? See?) The sharper ones will be mentally drawing charts and connecting dotty symbolism. The lucky ones will just pour another shot and laugh along with the end credits.

Life as a Hong Sang Soo movie. You could do worse.

Will now rewatch my favorite bits of Oki's Movie. And Saturday night. :)

And how about that ending? Wasak si Oki.

Hey, can’t find any contact info on your site – which I’ve just been enjoying. Can you locate mine on http://www.subtitledonline.com and drop me a message please?